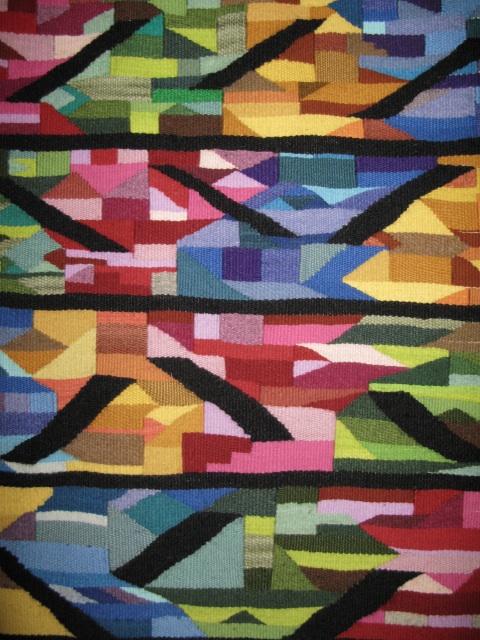 This is the last shot on the tapestry that’s been on the high back loom for the last four years. It started as a demonstration piece for the rodeo and livestock show – the size and the color worked well in that large space and people liked to stop and watch the very slow weaving process. “You must have a lot of patience” was the mantra we heard over and over again from people as they came by our booth. Little did they know just how long it would take and just how much patience was involved. It normally was woven on during the three weeks of the livestock show then went into storage, but with the opening of the Guild House it had a new home and was on permanent display. It also traveled to the Craft Center a couple of times, and was in the courtyard of Chelsea Market one day during the last sale. When it was there a woman stopped by and said that she’ed donated it to the guild and she was glad to see it being used.

The loom was made by Donna Rae’s husband, Clarice’s father, for an early member of CHH – I believe his name is spelled Teegarten – but I could be wrong about that. There is a piece by him in the little side chapel at Bayou Manor. When he died, he left it to the aforementioned woman who had helped take care of him in later years. She though was not a weaver and found the whole thing a little daunting, so she gave it to the guild. For many years it sat in the back of the storage facility we rented, and about 2004 we brought it out and took it to the rodeo. This is the third piece woven on it, and all have been collaborative pieces with many different people weaving on them.

Connie Elliott’s husband Tom did some major restoration work on it about 5 years ago, replacing hinges and strengthening the base along with some other needed work.

This piece that was just finished was done in four bands divided into 4 different color areas, red, blue, yellow and green. Each band was separated from the previous one with a black stripe and the color areas were juggled inside each section so that the same color was never on top of itself, and the position was never repeated. There were also three black diagonal stripes inside each band. The color areas were composed of geometric shapes, and while it’s not figurative your eye can find areas that look like various things if you want them to. That type of design works well with a piece that a number of people will be weaving on, it’s simple, easy to follow, and just about everyone can weave a square or a rectangle.

It’s kind of fitting that a photo was taken of the final weft going in, over the years the piece has been photographed over and over again. While weaving on it at the rodeo, you just got used to the flashbulbs going off, and it’s been used by the Craft Center in some publicity shots and I’ve seen it on the Internet a couple of other times. That’s why I say, up until now it’s ‘the most photographed unfinished tapestry in Texas.” But now it’s done. It isn’t off the loom yet, but it will be soon, and tapestry study group is going to help with the design of the next piece that we put on the loom.