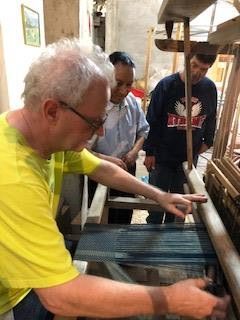 From Blaine:
When I was in Ecuador we visited a weaver outside of the town of Otavalu and he insisted that I weave on his loom. I was terrified that I’d break a thread or something, but it all went well. It was a very old loom in a fairly dark space, with just a couple of looms and a huge warping mill, that was at least 5 feet tall. I don’t speak Spanish and no one there spoke English, but it was easy enough to figure out what was going on. 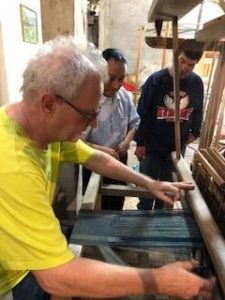 Thankfully the tromp was a simple twill and I only wove about an inch. My friends and I each left with a cotton scarf and some avocados they insisted we pick off the tree outside. Otavalu is known for its market and while a lot of the items are mass produced, there are artisans like this weaver still making quality goods for sale.