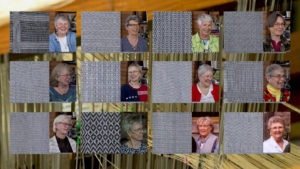 My videographer husband, Rainer Romatka, and I have spent the past 3 years working on a new feature-length documentary film celebrating handwoven cloth. The film is called “Interlacements: Threads and Lives”. We are taking a unique view of hand-weaving in the movie, we are focusing on relationship. This is a documentary film that tells a few stories of the personal relationships that develop between weavers and the end-users of handwoven cloth. We want to express that hand-woven textiles are more than just functional; they are a piece of folk art that remind the user of the person who wove it – a special connection between them, every time the cloth is used. This documentary will showcase and celebrate these moments. See details and watch the trailer at www.interlacementsmovie.com
Each of the featured stories (5 in number) are some 7- 15 minutes long, and explore a single story of a special hand-woven cloth, and how that cloth unites people. They are heart-warming stories, interspersed with these featured stories, we have closeups of looms in action; floor looms, tapestry looms, inkle looms, backstrap looms, tablet weaving. And we have many Seattle area weavers answer the question “What’s the best thing about weaving?” The answers have been varied, creative, and enthusiastic.

We yearn for connection in modern society. This film focuses on various stories of real people and real weavers, and the way the cloth brought them together.
One of the stories involves John Beard, who twines Pacific Northwest Native Ravenstail dance robes, and the Tsimshian Haayuuk Dance Troupe who perform in them. When we showed the story segment to Janice Lonergan (principle dancer), she was so moved, she offered to bring the troupe to the First Private Screening of the film at the Seattle Weavers’ Guild meeting this past Nov. 29, to dance John’s robes before the documentary played – and “bless the film with dance”. Rainer and I were beyond humbled with her generosity. This dance celebration book-ended the event nicely, since the day started out with the Native dance and that story segment ends the film as well. Video and stills of this day’s happenings are available on the website above under First Screening. 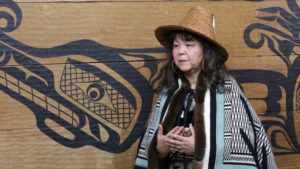 We had top people in the weaving world view the film (to gather marketing quotes), and our own dear Deborah Chandler gave us this one:

“Extraordinary. I want every indigenous weaver in the world to see this [film]. With their cultures under assault by “modernity”, with the threat of extinction being so real, I think this would give them both strength for the present and hope for the future. It would also be good for every kind of “helping program” like the children’s hospital shown, such as occupational therapy education, counselors of all kinds, and countless others. Anyplace the soul matters… ”

Deborah also gave us something else. A request, a challenge. She would like to see the film dubbed into Spanish. Not subtitled; dubbed. She explains that the weavers she works with are in some cases illiterate, and will need to hear the dialogue. Of course, when Deborah Chandler calls, weavers jump! We have started a GoFundMe campaign to fund the dubbing.
https://www.gofundme.com/let039s-dub-the-film-interlacements-threads-amp-lives
I am delighted to think that we, the weaving community, can pull together to get this done. Anyone interested in helping out in this community effort is most appreciated!
Thank you,
Marilyn Romatka

Next Guild Meeting will be
in person and via Zoom
on

Susan Kingsbury will present the program for our May meeting, sharing her experiences on her trip to Uzbekistan, its people, their culture and textiles.

We will also be voting to approve the proposed slate of officers for the Executive Board.  A quorum of members is required for this vote, so please plan to attend in person or via zoom.

See any newsletter for the meeting zoom link.

Map to The New Guild House