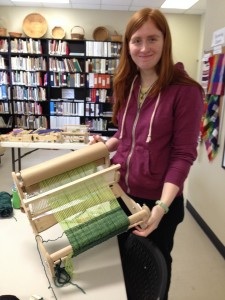 The Guild House was abuzz with activity on Saturday. DeeDee was supervising her student Ann on the Twill Gamp independent study as she simultaneously worked on library cleanup. Din and Lorene were weaving on their independent projects on the big floor looms in the back. D’Anne had a big class of new Cricket Loom students setting up their first warps.

Show committee meetings went on all day. In the morning, invitations were addressed and stamped. Then Pat and Peg coordinated the software details so that entrants can log in their data. Then Tracy and Peg worked out the various vignettes and fixtures for the displaying the sale items. Lots accomplished and the sale is less than a month away. Are you weaving?

Surprise of the day was when I invited a couple in for a look around – they had their noses pressed against the hall window! Kenneth and Christie had just met that morning for a blind date brunch at Tout Suite! Obviously they were having a good time getting to know each other and exploring the gallery at the Guild House. Christie put the sale dates in her Google calendar and said to him – “I’m inviting you” and he said, “I’ll be there!” Love at the Guild House.