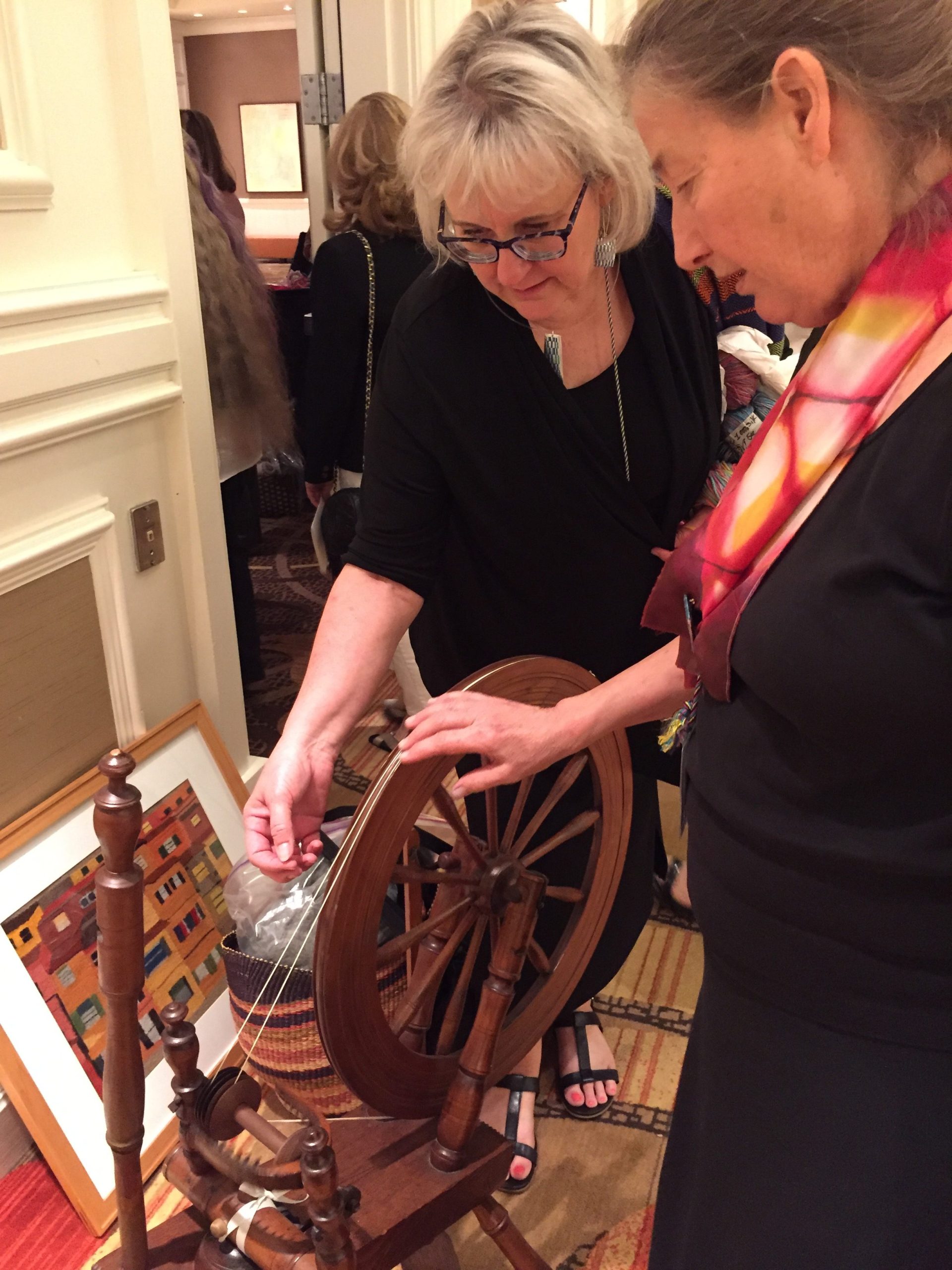 What Happens When You Win a Spinning Wheel!

Backstory: My mother, now 92, grew up dirt-poor on a farm in central Illinois. Her father was a widower by the time she was two, so his mother came and helped raise the four children, my mom being the youngest. She told me many stories of how they lived in the late 20’s and through the Depression, but the fact that her dad kept sheep, was just never mentioned! Since her hearing is going, I wrote her a letter about the conference, weaving, classes and the fact I won the spinning wheel. I told her I’d like the wool carders that were at the house for display purposes and this is her reply:

“…with the great thing you won, now you’re going to need sheep to provide you with the raw wool. I still have the carders. They are pretty worn but as you said – for display only. I don’t think I told you about sheep shearing time at home.

We never had a lot of sheep – maybe at the most 25 ewes and one (ram). The baby lambs always came when it was cold, cold, cold. Daddy would bring them in the house wrapped in a burlap bag. Put them close to the stove until they got warm, then take the babies back out to their mommy – we weren’t allowed to touch them, because if the mother smelled where we had touched them, she wouldn’t take them back. Reason for Daddy carrying them wrapped. He didn’t touch them either – sometimes the ewes just didn’t want to be mommies and then we had pet lambs. Baby lambs have a special smell, good smell. Grandma had bottles and nipples that she used to feed the lamb. This was before I went to school, the lambs could have the living room as their own house. It was my job to clean up their mess – I soon learned how the lamb stood, what it was going to do. Pee or poop – I’d put a tin can to catch the pee and the shovel we used to clear ashes from the stove, to put under to catch the poop.

Back to shearing – the clippers to cut the wool was hand cranked, and you had to turn it fast- Daddy carefully removed the wool from the back end (poopy) – Put in a tub. When the wool was all off the sheep He’d tie it in bundle. Had a big, big gunny sack, to put all the wool in to take and sell.

Grandma would take the poopy wool – wash it through several waters (by hand) – when it was clean and dried – Daddy would card the wool for Grandma to make wool comforts. I still had mine in Florida – one day I decided to put new fabric on the outside. When I tool the old fabric off – the wool just fell into crumbs. Years of use, and the fact that all the lanolin was removed from washing.

Grandma saved the poopy water and put it around her flowers.”

So thanks to winning the raffle, I was able to hear another great story from my mom. I sent her a shawl I wove for her birthday/mother’s day this year – and she was thrilled with it. As some may know, my mother is difficult at best, but we have always connected over fiber. Thank you to the guild for saving this beautiful old spinning wheel – I’m set up for lessons and hope I can learn to spin.

One of the names I descended from is “Weaver,” so fingers crossed, I don’t let the ancestors down!

Footnote:  The antique wheel was donated by Fern Handler from Janie Fitzgerald’s estate and Connie Elliot and her husband Tom did some restoration.  It was raffled off at the CHT Conference in June and the proceeds benefited CHT.