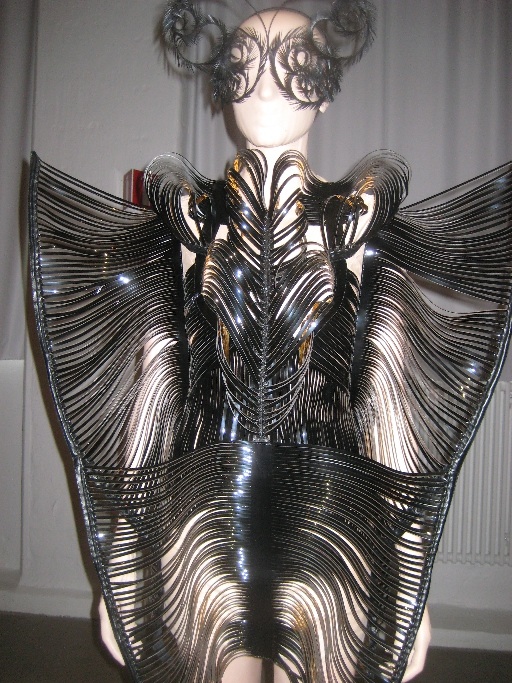 While in Sweden last fall, the group stopped in Boras Sweden to visit the Textile Museum. We learned that they had just re-opened in their new space in May 2014. The Museum and Textile Fashion School are a topic for another article entirely. Boras is known as the textile region, the city being the first to collect taxes on handiwork and allowed itinerate craftsmen in the 15th century. The coat of arms for the city of Borås has always been as described in the charter that king Gustavus II Adolphus signed May 25th, 1622: “…two wool scissors, one pointing downward, the other pointing upward“.

Walking from the car toward the museum there was a collective gasp as we rounded a corner and saw a building made out of giant jacquard punch cards. Later, I asked a docent if the cards wove an actual pattern. Why yes she said, not many visitors even recognize the building as jacquard! And yes it is the pattern for the city crest of Boras.

We were here to see the work of Iris Van Herpen. I had no idea who this person is, but if you recognize names like, Tilda Swinton, Beyonce, Lady Gaga, Bjork and style icon Daphne Guinness, you may have seen van Herpen’s work.

From her extensive website* I quote, “Iris van HerIris Van Herpen – Normal Rules Do Not Apply stands for a reciprocity between craftsmanship and innovation in technique and materials. She creates a modern view on Haute Couture that combines fine handwork techniques with digital technology .Van Herpen forces fashion to the extreme contradiction between beauty and regeneration. It is her unique way to reevaluate reality and so to express and underline individuality.”
This exhibition is a retrospect of her work. The collections were grouped in a trio of mannequins.The following descriptions come from Van Herpen’s website*.

CHEMICAL CROWS – January 2008, Amsterdam Fashion Week
A group of crows living around Van Herpen’s studio triggered her association with black magic and alchemy. Crows are known for their intelligence, predilection for glittering objects, and are traditionally associated with secrecy and symbolism. Van Herpen shares with alchemists a passion for controlling and transmuting materials. As alchemists tried to turn base metals into gold, so Van Herpen has transformed in several designs gold-coloured ribs of 700 children’s umbrellas into shapes reminiscent of the movement of wings and feathers.
[slider source=”media: 11907,11908,11909,11910,11911,11912,11913″ limit=”30″ link=”lightbox” width=”500″ height=”500″ title=”no” pages=”no” autoplay=”3000″ speed=”3000″]

REFINERY SMOKE – July 2008, Amsterdam Fashion Week
The ambiguous character of refinery smoke, both beautiful and poisonous, inspired this collection. Van Herpen translated the elusiveness of industrial smoke into specially woven metal gauze. She turned metal threads into an extremely soft and pliable material. The metal kept its characteristic of oxidation and Van Herpen considers this inherent chemical process as (visually) reflecting the dual aspect of industrial smoke.
The artist created a number of pieces using the 3-D Printing and lasers. A fascinating exhibit, showing a side of fashion I never see. True runway designs. For more information on Iris Van Hepen, please see her comprehensive website.